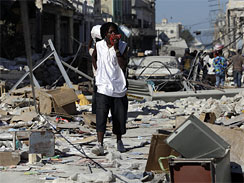 In the wake of the devastating earthquake in Haiti, I’m reminded yet again that natural disasters, while no respecter of persons, fall disproportionally upon the poor. Part of the reason that the quake’s effects were so horrifying was that the buildings were already so poorly put together. Unstable structures, even hospitals, schools, and prisons, unable to withstand smaller tremors in the earth’s crust, stood no chance against the 7.0 magnitude quake. Relief efforts are bogged down, costing precious time and therefore lives, due to already-crumbling infrastructure and lack of resources to get help to the places it is needed.

We can’t stop natural disasters from happening. But perhaps one day we’ll be better at helping all people prepare for them, by assuring that structures are safer and means of communication and transportation are in place. Yes, this will mean that wealthier nations have to help places stripped bare by poverty build safe and effective buildings and roads. Money well spent.

At the same time, I remain proud of my denomination, The United Methodist Church. I was not Methodist growing up, but Catholic. When I went ‘shopping’ for a denomination where I could live out my call to ministry, I chose the UMC intentionally, despite its inevitable faults, because of a few theological principles (prevenient grace, reverence for the Lord’s Supper, sanctification described as a journey toward perfection), and because of the church’s approach to mission. In The United Methodist Church, mission teams are trained to work with people in their native countries without seeking to evangelize or convert anyone to Christianity or Methodism. Although certainly, if someone asks, a volunteer may share why he or she feels moved to help. Volunteers and staff are trained to offer aid in ways that go beyond charity or hand outs, but work side by side with others, empowering individuals and communities to build sustainability. We’d much rather teach people to fish than buy a basket of fish, give cows and chickens rather than donate milk and eggs. We’re in it for the long haul, because we believe that all God’s children deserve the opportunity and ability to live free and joy-filled lived, with food, clothing, shelter, and sanitation.

For this reason, The United Methodist Church has been connected with the nation of Haiti for many years, with many churches and conferences sending teams down on mission trips to build and sustain communities alongside their Haitian hosts. The United Methodist Committee on Relief (UMCOR) established a field office in Haiti half a dozen years ago, and has been working on the ground in that country for quite some time. At the time of the quake, six North American United Methodist volunteer teams were in Haiti, and reports from them and from the staff and volunteers at UMCOR were slow to trickle in. These folks were and are on the front lines, some of them relief workers now, some of them missing or recently rescued themselves. Their courage is astounding, and my heart and my prayers go out to them.

And that’s not all. Because local United Methodist congregations pay apportionments or mission shares (a kind of proportional financial commitment to their larger regional organization and the global church), all of the administrative costs for UMCOR and other relief efforts are paid for by the people of The United Methodist Church. This means that when a disaster like this happens, and people donate money through the UMC or UMCOR, 100% of that money goes directly to relief efforts on the ground. No administrative costs, no salaries for the people organizing the work. All of the money can go to supplies and distribution, getting personnel and resources to where they need to be quickly and effectively, through the global network of Methodists and the people already in place in Haiti. I am not aware of many other organizations that can say that– organizations well connected and already in place, that can give 100 pennies from every dollar to the stated need.

If you want to make a financial gift to the relief efforts following the Haiti disaster, you can give online through the United Methodist Committee on Relief and know that 100% of your contribution will go to the designated relief effort. You can also make a donation by check through any local United Methodist Church (find one near you) and designate Haiti Emergency, UMCOR Advance #418325 on your check or envelope. Also ask at your local church if they will be collecting health kits, inexpensive hands-on ways to gather and ship basic supplies to Haiti. You can learn about other ways The United Methodist Church is helping out online at www.umc.org.

This is what my church does best: show our belief in God and in the beauty of humanity by living in love and service with those in greatest need. There’s much we don’t get right a lot of the time– we are a human organization, but when it comes to the selfless love of others and fearless help for those in need, I’m proud to be part of a body so generous, fearless, and loving.

2 thoughts on “Prayers and Relief for Haiti”